A joint project between APSL-UK and FOG Sri Lanka

As envisioned in the SDGs, establishing ‘Solar Villages’ to harness clean, affordable solar energy is an ecologically friendly and socially effective approach to drive economic growth, eradicate poverty and sustainable development. Professor I M Dharmadasa formulated the concept of ‘Solar Villages’ in the 1990s to develop deprived, agriculture based rural villages in Sri Lanka.  In September 2008, a pilot project was launched in the Kaduruwewa village cluster, in the Kurunegala district, Sri Lanka.  A solar powered system replaced a costly to operate diesel pump to provide clean water for drinking and household use.  The Village Development Committee then used the savings to improve the village school, library, temple, roads etc.  Guided by Prof Dharmadasa, villagers also participated in productive activity such as tree planting, organic farming, brick making, bee keeping, carpentry, vegetable and fruit production, as well as voluntary community initiatives.  This way, villagers were empowered to forge their self-development, village children benefitted from a positive learning atmosphere, and the whole village had a greener natural environment to live in.

In 2017, APSL in collaboration with Hela Sarana UK jointly funded the installation of a Net Plus solar power generating system in the village of Nochchiya, in the Anuradhapura district, Sri Lanka.  This solar power system was set-up under the Government of Sri Lanka’s ‘Surya Bala Sangramaya’ programme that aims to install one million solar roofs to make households both consumers and producers of power, moving the country to self-sufficiency in power generation. While pumping water for household use is powered by electricity from the National Grid, income from solar power generated by a 6 kW solar roof is added back to the National Grid via the Net Plus system.  This income not only covers a large part of the cost of electricity to pump the water, the net savings are then used for improving village infrastructure in Nochchiya based on priorities identified by the Village Development Committee.

Following the end of the internal conflict in Sri Lanka in May 2009, APSL recognised that promoting connectivity and understanding among Sri Lankan communities living in Sri Lanka and the UK would contribute positively towards strengthening peace and reconciliation.  APSL launched the ‘We Sri Lanka’ initiative – a series of events focused on reconnecting people, reconciling differences arising from years of conflict, and rebuilding lives of war affected people in Sri Lanka by reaching out to the Sinhala, Tamil, and Muslim communities living in the UK.  Establishing a Solar Village in the previously conflict affected areas in North East area of Sri Lanka was one of the key projects envisioned as part of APSL’s ‘We Sri Lanka’ initiative.

Based on the success of Solar Villages in Kaduruwewa and Nochchiya, APSL is now working with the Foundation of Goodness (FOG) in Sri Lanka to establish another Solar Village in the village of Puthiya Nagar in the Vanni area of North East Sri Lanka previously affected by 30 years of conflict.  Puthiya Nagar consists of around 80 refugee families re-settled after the end of the conflict.  A number of families in the village are headed by a widow, or have disabled family members to take care of.

APSL has fully financed the installation of a 6 kW solar roof on top of the Community Centre in Puthiya Nagar which also houses a Library and Pre-School for the village.  The ~ Rs 1.3 million cost of installing the solar roof, as well as providing an electricity connection, wiring and illumination to the Community Centre was met through the combination of proceeds from the 2018 APSL Dinner Dance, individual donations, and corporate giving.  The Ceylon Electricity Board (CEB) has now provided an electricity connection to the Community Centre, and soon the village will be able to generate an alternative income stream from the Government’s Net Plus system.

FOG, our development partner working with the Village Development Committee in Puthiya Nagar has carried out an assessment of the most essential development needs of the village.  The priority needs identified include:

The net income generated from the solar power system will be utilised to meet some of these essential needs in a phased approach.  Meanwhile FOG has already undertaken improvements to the Village Library as well as repaired and upgraded five public water wells in Puthiya Nagar to improve access to a regular source of clean water for the villagers. 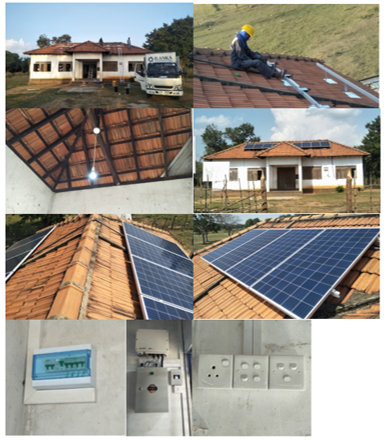