You can now view the event recording on youtube.

The Association of Professional Sri Lankans (APSL) in the UK in collaboration with the Letchworth Dhamma Nikethanaya Buddhist Academy will be conducting the next discussion of the ‘Living in the UK/Sri Lankan Cultural Values’ series on Saturday, 13th March 2021, 5pm – 6.45pm via Zoom.

George has advised the Clinton and Obama administrations on immigration law in relation to South Asia. He is a TV and radio talk show host who interviews prominent public figures and people with extraordinary abilities. George gave a highly acclaimed speech on reconciliation when President Mahinda Rajapakse visited Texas in 2010.

During his inspiring talk, George outlined some meaningful ways how we can contribute to lasting reconciliation in Sri Lanka.  Alluding to the World Bank’s support for Sri Lanka in transitioning to ‘a more competitive, inclusive and resilient upper-middle income country,’ George spoke about how Sri Lankan expatriate organisations and the international community can marshal their resources to assist the country in this transition amidst the disruption of the Covid-19 pandemic. He also talked about the importance of focusing on the ‘here and now’ rather than on the past, focusing on the following themes.

In conclusion, George spoke of the need for a comprehensive reconciliation programme, as without it progress in Sri Lanka would be weighed down by ethnic tensions that may plunge the country back into mayhem. George also mentioned how this year’s Queen’s honours list included Sri Lankans from the Sinhala, Tamil and Muslim communities. He also recalled how Tamil and Sinhala families protected each other during periods of unrest (including a personal family story), and the longstanding cultural ties that bring us all together. He ended with a rallying call for all ethnic groups in Sri Lanka to set aside their prejudices, put their collective shoulder to the wheel, and return the island back to paradise.

A large number of attendees joined the webinar from a number of countries including Sri Lanka, UAE, UK and US. APSL President Dr Mahesh De Silva opened the webinar and introduced the objectives and development activities of the Association of Professional Sri Lankans in the UK. APSL We Sri Lanka Lead, Gihantha Jayasinghe introduced the initiative and moderated the Q&A. APSL General Secretary, Gayani Senaratne concluded the webinar with a vote of thanks.

You can watch the full webinar featuring the talk by George R Willy here.

If you would like to receive information about future webinars organised by APSL We Sri Lanka, or support our activities, please write to us at wesrilanka@apsl.org.uk

The Association of Professional Sri Lankans in the UK (APSL) initiated the We Sri Lanka project in 2010 to promote peaceful coexistence and sustainable development in Sri Lanka. We do this by,

Sarath Wijesinghe and I. M. Dharmadasa

In the era of solar revolution taking place, solar roofs are mushrooming round the globe. In Sri Lanka also, solar roofs are becoming popular and the aim of this article is to provide real data to help the Sri Lankan community to understand the value of these projects. This in turn will accelerate the take up of solar roofs in the country by more families learning the benefits of solar roofs. For this series of articles, we have selected rather a large solar roof of 20 kW. Our next article will be on a small-scale solar roof of 5 kW for average families in Sri Lanka. 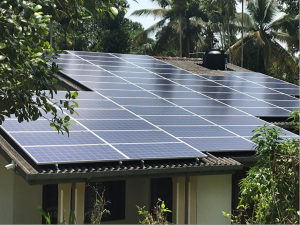 Performance of the Solar Roof

This system is installed under the “Net Plus” scheme introduced by the Government of Sri Lanka. The performance of the solar roof during a day is given below. There are two charts to show the performance during a sunny day and a rainy/cloudy day. The system produces electricity from 7 am to 4 pm during the day and the total produced is fed to the national grid. A sunny day, the system produces 94.5 kWh (units), and a rainy/cloudy day produces 65.3 kWh. 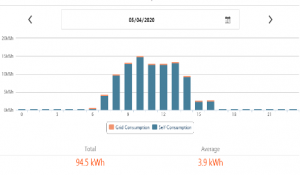 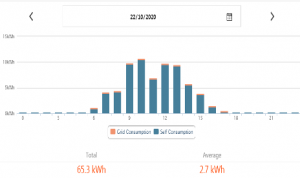 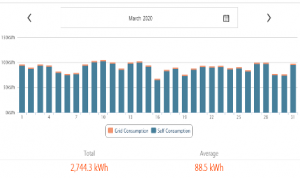 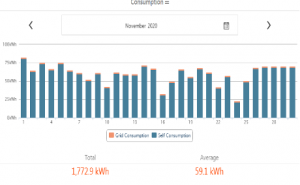 The total production of electricity and exported to the national grid, during the year 2019 is given by the next chart. The average production per month is 1,965 units and the total for the whole year is 23,582 units.

There will be slight changes to these figures due to ageing of the system, but these figures show the financial benefits to the owner of this system. By the end of 20 years contract, by spending Rs 26 Lakhs, the owner will receive Rs 82.3 Lakhs as the total return. These solar panels have a lifetime of ~30 years and the owner will enjoy free electricity for another 10 years subject to the system continue after 20 years, to use at home plus export the surplus to the grid receiving continuous income, during retirement.

Other Benefits of the System

The above figures indicate the financial benefits to the owner of the solar roof. In addition to these personal benefits, the owner contributes to many other social benefits.

Authors of the Article

Register now for the first event of the APSL We Sri Lanka webinar series focused on promoting peaceful co-existence and sustainable development in Sri Lanka will be held on Saturday 30th January 2021 at 3.00pm GMT.
The webinar presentation will be delivered by Mr. George Willy, an eminent immigration lawyer in the US and moderated by the APSL We Sri Lanka project leader Mr. Gihantha Jayasinghe.
Mr. George Willy is the founder and principal, Willy, Nanayakkara & Associates, Texas, USA. He was also an advisor to the Clinton, Obama and Trump Administrations on immigration matters in relation to South Asia / Asian Americans. He is the host of the TV Show, “The Other Side” where he interviews prominent public figures and also hosts the ‘Minds that Matter’ radio show featuring people with extraordinary abilities in various fields of endeavour.
Agenda
Introduction to APSL UK by APSL President Dr.Mahesh de Silva
Introduction to We Sri Lanka by the project leader Mr.Gihantha Jayasinghe
Keynote Presentation by Mr. George Willy
Q&A Session
Vote of Thanks by APSL General Secretary Mrs. Gayani Senaratne
Please Click here to register in advance for this event.
Dear all,
This year was another highly productive year for APSL despite many challenges. We continued to grow the initiatives from last year and improved our community engagement both in the UK and Sri Lanka.
The Scholarship Scheme, one of the most successful programmes of APSL marked its 5th Anniversary in 2019 and currently supporting 95 students in Sri Lanka. With the support from number of new sponsors we expect to increase the number of scholarships to over 100 from January 2021.
One of the major initiatives we launched last year was the Florence de Silva Memorial trust for Children. With kind donations through late Mrs. Florence de Silva’s Will APSL set up this initiative to support Sri Lankan children in numerous ways. So far, we supported 23 projects and donated over 2 million Rupees for good causes.
We have made significant progress with the APSL Solar Village Project and the 3rd Solar Village was completed in Mullaitivu district in December 2020.
APSL Cancer Relief Programme marked its 3rd Anniversary this year and established two more collaborations in Galle and Anuradhapura general hospitals to support cancer patients.  We expect to expand the programme in the new year by forming collaborations with Hambantota, Monaragala, Colombo, Jaffna and Rathnapura General Hospitals.
‘Living in the UK’ discussion series for 2020 was held in collaboration with the Letchworth Dhamma Nikethanaya Buddhist Academy attended by the dhamma school children and their parents.
When the Covid-19 Pandemic started affecting the whole world in the beginning of the year APSL started exploring the ways to support the Sri Lankans affected and we launched APSL Emergency Response fund in March 2020. Through this, we supported over 1600 families in various parts of Sri Lanka and provided PPE and equipment to 9 key hospitals.
We also launched a webinar series in April 2020 to provide guidance and information. The webinars featured timely topics such as employment, immigration, economy, mindfulness as well as Covid-19 tests, treatments, and vaccines. Those webinars were delivered by leading professionals in their respective fields. Moreover, Sri Lanka High Commission, London in collaboration with APSL and Sri Lanka Association for Software Services Companies (SLASSCOM) organised a webinar to launch ‘SLASSCOM Global Referral Programme’.
2021 expected to be another busy year for the APSL team and we plan to launch number of new initiatives. I and the Executive Committee highly appreciate your continued support for APSL activities and look forward for your participation in the future events and projects.
I wish you all a very happy New Year!
Dr. Mahesh de Silva
President – APSL

Wishing you and your families a Merry Christmas and a happy and relaxing holiday season! 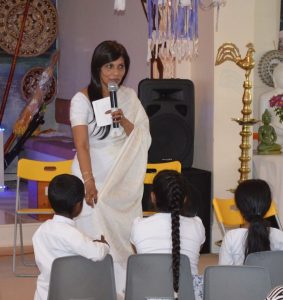 It is with great sadness that APSL announce the death of one of our former Vice Presidents and Executive Committee Member, Mrs. Shiranee Joseph De Saram, on 16 December 2020.
She was a Specialist Speech Language Pathologist with over 40 years of experience in Sri Lanka and in the UK. She served as a Specialist Speech and Language Therapist at Central and North West London NHS Foundation Trust from 2003-2015.
In her time with APSL Shiranee was involved in the ‘Living in the UK’ Seminar Series and delivered many excellent presentations. She also contributed to many other APSL charitable activities as an active member.
She was the founder Director of Rehabilitation Centre for the Communication Impaired (RCCI) and dedicated her services to address the need for a dedicated centre for treating over one million people with communication impairments in Sri Lanka.
Shiranee is remembered as a generous and incredibly kind lady who dedicated her life to help communication impaired people.
May she attain Supreme Bliss of Nibbana!

APSL donated library furniture, books, musical instruments and sports equipment to Maliyadhdha Primary School, Meepanawa, Udupussellawa through the Florence De Silva Fund. On behalf of APSL, we would like to thank Dr Kaveesha Gunathilaka, Medical officer in charge, Primary care unit, Rupha, Nuwaraeliya for her kind coordination and dedication towards the project. 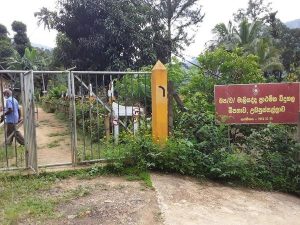 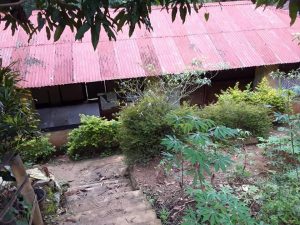 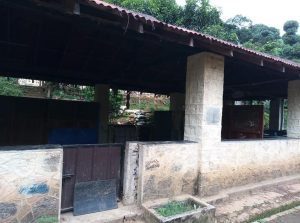 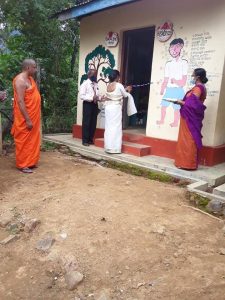 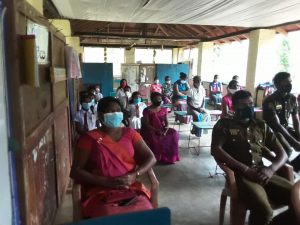 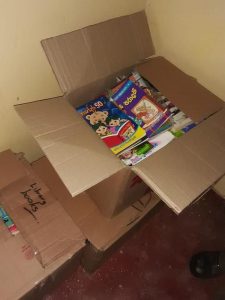 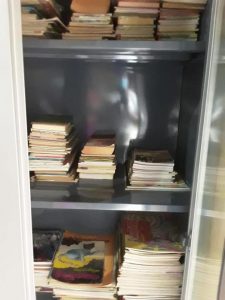 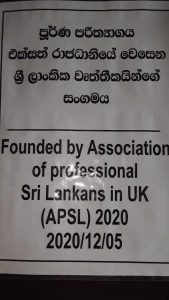 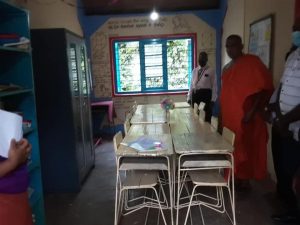 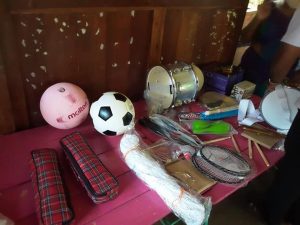